New York City comprises 5 boroughs sitting where the Hudson River meets the Atlantic Ocean. Its iconic sites include the Empire State Building, Statue of Liberty and Central Park. The city is recognised the world over and of course there are the iconic Yellow Cabs. The game contains 600 questions on New York. 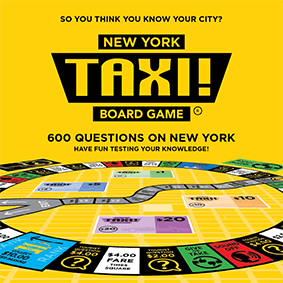 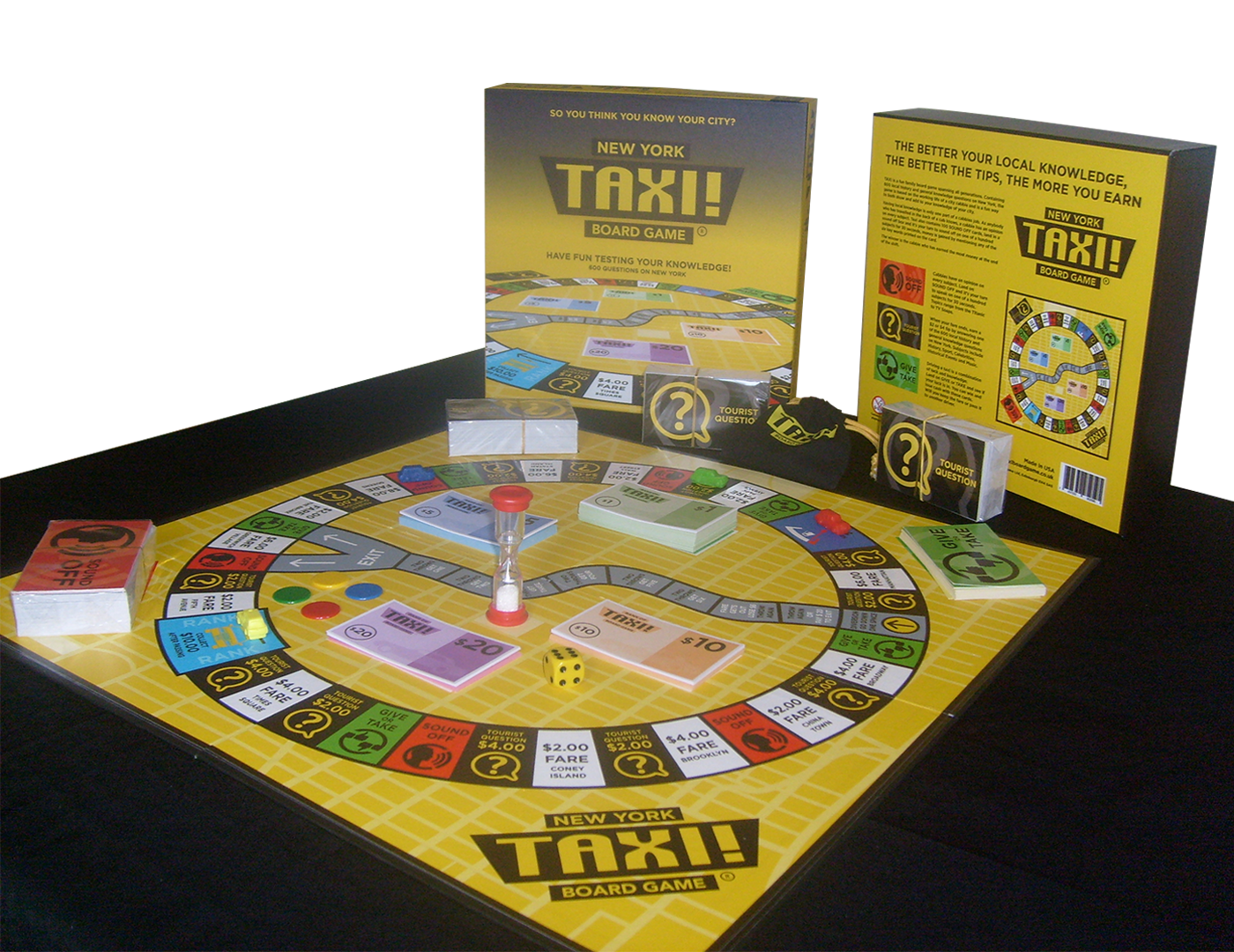 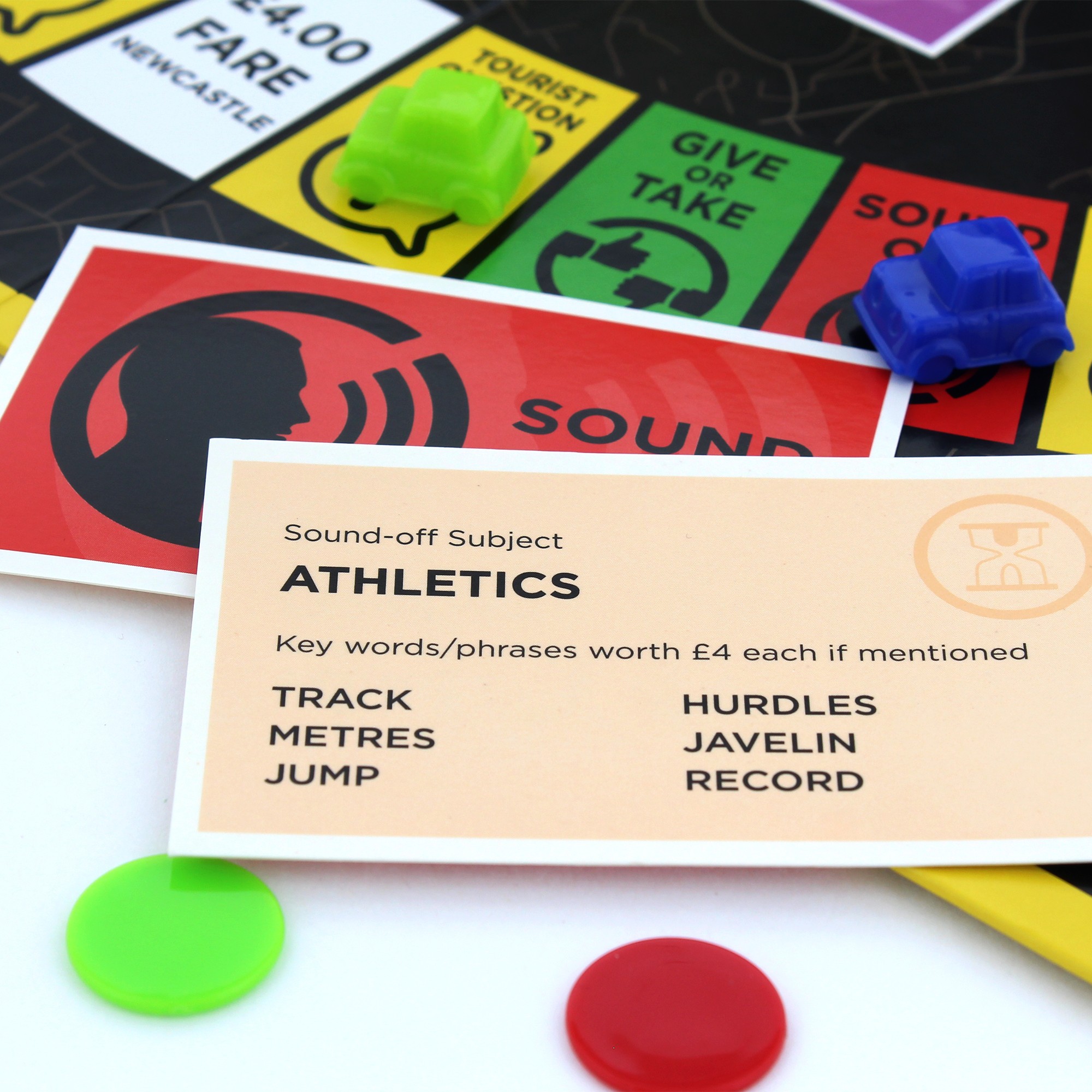 A board game full of fun and knowledge for all the family. Contains 600 history and general knowledge questions about New York, the city that never sleeps, combining skill and luck in this popular trivia game.

Plus 100 opportunities for you to Sound Off like a cabbie on a wide variety of topics, the more key words or phrases you match the more you earn.

And then there is Give or Take – you decide whether you keep the card or pass it to another player. It could bring wealth or problems.

The New York Taxi! Board game is a new game full of fun and knowledge for all the family (12 years +).

Created by an Edinburgh black cab driver, the game was first piloted in Edinburgh and Glasgow, outselling Monopoly and Trivial Pursuit in major stores throughout Central Scotland. Now, with new features and a redesigned board, the New York edition was launched in July 2015.

Taxi Board Game contains 600 local history and general knowledge questions about New York, and just like driving a taxi, the better your knowledge, the better the tips, the more you earn. When your fare ends, answer a question on New York to gain a tip.

Driving a shift in a taxi is a combination of luck and knowledge, turn left you may get a $5 fare, turn right and you could get a $40 tour. This is reflected in the ‘Taxi Board Game’ by the ‘Give or Take’ squares. Keep the card for yourself or pass it to a fellow player. Is your luck in? The winner is the player who has earned the most money at the end of the agreed shift time, e.g. 1 hour or 90 minutes.

Samples of the 600 Questions

For a $4 Tip:
What name was given to the Hurricane that hit New York in October 2012?

Got what it takes?

Buy the game now from our online store.

When you visit any website, it may store or retrieve information on your browser, mostly in the form of cookies. This information might be about you, your preferences or your device and is mostly used to make the site work as you expect it to. The information does not usually directly identify you, but it can give you a more personalised web experience. A cookie in no way gives us access to your device or any information about you, other than the data you choose to share with us. Because we respect your right to privacy, you can choose not to allow some types of cookies.

We use cookies to let us know when you visit our Website, how you interact with us, to enrich your user experience, to customise your relationship with our Website and to remember the notifications you’ve seen so that we don’t show them to you again.

Click on the different category headings to find out more. You can also change some of your settings. Note that blocking some types of cookies may impact your experience of the Website and the services we are able to offer.

These cookies are strictly necessary to provide you with services available through our Website and to use some of its features. They cannot be switched off in our systems. They are usually only set in response to actions made by you which amount to a request- for example setting your privacy preferences.

Because these cookies are strictly necessary to deliver the Website, you cannot refuse them without impacting how our Website functions. You can block or delete them by changing your browser settings and force blocking all cookies on this Website. Note that by doing you may be unable to take full advantage of the Website.

These cookies do not store any personally identifiable information.

These cookies collect information that is used either in aggregate form to help us understand how our Website is being used or how effective our marketing campaigns are, or to help us customise our Website and application for you in order to enhance your experience.

If you do not allow these cookies we will not know when you have visited our Website, and will not be able to monitor its performance.

If you do not want that we track your visist to our site you can disable tracking in your browser here:

To opt-out of participating in Google Analytics data follow the instructions:
https://tools.google.com/dlpage/gaoptout

These cookies enable the Website to provide enhanced functionality and personalisation. They may be set by us or by third party providers whose services we have added to our pages. For example, we use WordPress cookies to allow you to comment on forums and news articles.

We also use different external services like Google Webfonts, Google Maps and external Video providers. Since these providers may collect personal data like your IP address we allow you to block them here. Please be aware that this might heavily reduce the functionality and appearance of our site. Changes will take effect once you reload the page.

In addition to the options provided above, you may refuse or accept Cookies from the Website or any other website at any time by activating settings on your browser. Most Web browsers automatically accept cookies, but you can usually change your browser settings to prevent that. You have the choice to accept all cookies, to be notified when a cookie is set, or to reject all cookies. However, if you choose to reject all cookies, you may be unable to take full advantage of the Website that depend on cookies. Information about the procedure to follow in order to enable or disable cookies can be found at:

If you want to delete any cookies, please refer to the instructions for the operating system of your device to locate the file or directory that stores cookies.

To find out more about cookies, including how to see what cookies have been set and how to manage and delete them, please refer to:
www.allaboutcookies.org/manage-cookies.

Please be aware that if cookies are disabled, you may be unable to take full advantage of the Website as intended.