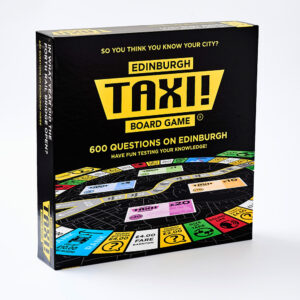 Menu
View basket “Edinburgh” has been added to your basket.

Where to, me old china?

London – the capital of England and the United Kingdom. Famous landmarks include Buckingham Palace, Big Ben, the London Eye and Tower Bridge. London has the oldest underground railway network in the world and of course the famous ‘black cabs’. The game contains 600 questions on London.

A board game full of fun and knowledge for all the family
Based on the working life of a London Taxi Driver
600 local knowledge questions on the London area. The better your knowledge the better your tips.
The opportunity to sound off like a cabbie – talk for 30 seconds on a particular topic
You decide the duration of the Taxi drivers 'shift' at outset. The person with the most money at the end of the shift is the winner.

The London Taxi! Board game is a new game full of fun and knowledge for all the family (12 years +).

Created by an Edinburgh black cab driver, the game was first piloted in Edinburgh and Glasgow, outselling Monopoly and Trivial Pursuit in major stores throughout Central Scotland. Now, with new features and a redesigned board, the London edition was launched in July 2015.

Taxi Board Game contains 600 local history and general knowledge questions about London, and just like driving a taxi, the better your knowledge, the better the tips, the more you earn. When your fare ends, answer a question on London to gain a tip.

A Sample of the 600 Questions

For a £2 Tip: In what year did London host the Olympic Games for the second time?